By clicking I agree below, you confirm that you are an Australian resident, or will only access Fund Information as a unitholder in a Fund issued by Pinnacle Fund Services Limited and you accept all of the Terms of Use of this website, which may be found here.

By clicking I agree below, you confirm that you are a New Zealand resident, or will only access Fund Information as a unitholder in a Fund issued by Pinnacle Fund Services Limited or Implemented Investment Solutions Limited, and you accept all of the Terms of Use of this website, which may be found here.

By clicking I agree below, you confirm that you are a qualified / professional investor or equivalent in the relevant jurisdiction where the vehicle is permitted to be marketed to. You also confirm that by accessing this website, you will not contravene, or cause Antipodes or any of its affiliates to contravene, any law that seeks to regulate financial promotions both in the country of your residence and in the country in which you are viewing this webpage and you accept all of the Terms of Use of this website, which may be found here.

Home | Insights | Investing in EVs: Tesla, VW and the race to dominate

As the auto industry embarks on the biggest transition in its history, a global race to dominate electric vehicles is underway. Tesla, Volkswagen and the evolution of the EV market is discussed in this episode on the Good Value podcast.

You can listen to the 20-minute discussion here, or continue reading the synopsis by Alison Savas below.

More episodes are coming soon. Subscribe to the podcast on Apple Podcasts, Google Podcasts or Spotify.

Investing in EVs: the evolution

There’s no doubt the electric vehicle market is a major structural growth story. While there are various projections, as a base case we anticipate EV sales are estimated to grow to around 30% of global vehicle sales by 2030 – up from just 3% today. This is a 10-fold higher share in an automotive market which is itself growing.

There are multiple drivers of this structural growth. Environmental awareness and elective consumer decisions are part of the story.

Currently, consumer choices are being nudged by government subsidies in jurisdictions across the world which are helping to accelerate adoption. But in the next few years it will be raw economics which emerge as the key driver for demand. For consumers, EVs will offer a lower total cost of ownership despite the higher upfront purchase price, even without subsidies.

For car makers with the right strategy, they will deliver higher margins once they’re producing at scale. So, there’s both push and pull factors behind adoption, which is a strong combination.

Tesla started life as the star of the show. The front runner. It is undoubtably the most well-known EV brand today. It launched its first EV in 2008, and since then it’s largely had the EV market to itself, building a formidable brand.

But times are changing.

Over the next few years, the industry dynamics look very different. Competition is coming from almost every other global automaker.

What has become increasingly clear over 2020 (and which 2021 and the years beyond will reinforce) is that whilst new entrants like Tesla have changed the debate and landscape in the automotive industry, the traditional automakers have the technology and ability to compete head on and they know how to produce and sell great cars.

Any first mover advantage Tesla had is arguably vanishing.

VW is in the midst of the most aggressive and complete push into EVs by any major legacy automaker.

Last year the German automotive giant sold around 230,000 EVs. This is expected to more than double to over 600,000 this year. In comparison, Tesla is expected to sell around 800,000 EVs.

Next year, Antipodes projects both Tesla and VW will sell around 1 million EVs each, then in the years beyond VW will outsell Tesla.

If we look to 2025 – which is when industry experts expect EVs will really take off – VW could be selling more than 2 million EVs, or around 20% of VW’s total volumes. But more significantly, VW could have over 20% of the global EV market with the number one position in Europe and China, which are expected to be the two fastest growing electric vehicle markets.

This point on market share is critical. While we may all be familiar with the Volkswagen brand, the group’s main mass market offering, the VW company has a product line up that covers everything from affordable quality (Skoda) all the way up to premium marques like Audi and Porsche and the super-premium offering Lamborghini. VW today is already one of the world’s largest car makers with around 10% of the global market. As the world transitions to EVs, VW has the opportunity and scale to significantly increase market share. 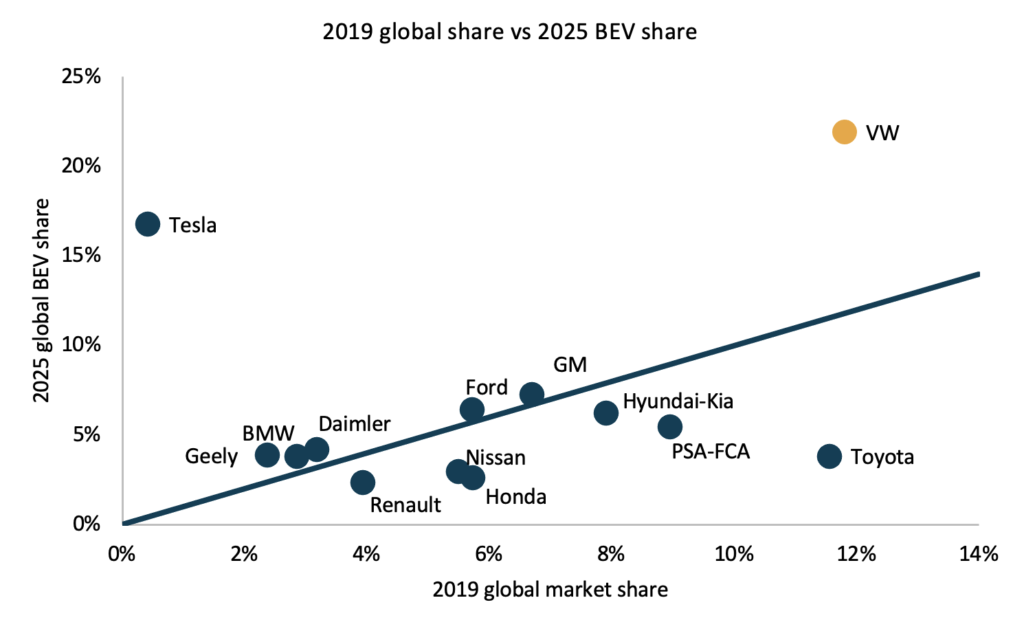 Interestingly, VW’s EV push was borne out of a self-inflicted crisis.

The diesel emissions scandal in 2015 (or ‘dieselgate’ as it’s known) propelled the automotive giant into the headlines for the wrong reasons when it was found to have been using software to cheat emissions tests. This prompted an EV offensive. Committing to full electrification was seen as the most effective and efficient way to clean up their line up and repair a damaged reputation.

VW’s all-in approach has been to standardise its EV offering around two scalable platforms, while other legacy automakers have taken a more gradual approach.

EVs are one of the most talked-about investment themes. Tesla, as a first mover, has been rewarded with a meteoric share price rise as the company’s aspirations have attracted an army of dedicated fans and investors. Tesla’s valuation today – some $630b – dwarfs Volkswagen’s $150b, yet VW is likely to sell more EVs than Tesla in the coming years and on similar economics. As a pragmatic value manager, the difference in valuation ascribed by the market for these two companies is interesting.

There is an argument that Tesla may be more than just an automaker – investors are attracted to innovation in areas such as autonomous driving software and “robotaxis”. But the question is what do you want to pay today for success in businesses that don’t yet exist? On Tesla’s current valuation the market is factoring in around $500b.

The hurdles to fully autonomous vehicles on public roads are immense. Notwithstanding the hardware and software challenges, there are significant legal and regulatory hurdles. Tesla hasn’t solved these issues – no one has – but ascribing half a trillion dollars of value to the company suggests success is guaranteed.

When it comes to VW, we have a company that’s already made the investment to develop an electric range and will benefit from a cyclical rebound in economic activity and pent-up demand in the auto cycle. VW is also a great way to get exposure to the strong recovery we’re seeing in China, the largest auto market in the world where VW has the leading share. At just 8x forward earnings and generating free cash flow of over $10b p.a. – and that’s post the investment in the electrification offensive – it’s hard to imagine how VW won’t transition to a secular growth winner as it dominates electrification.

Whilst EV sales are accretive to VW’s earnings, the margin is understandably lower than an equivalent vehicle with a combustion engine. However, today’s profits are based on EV sales of around half a million units. Imagine how profitability can inflect with EV sales likely to double again in 2022 and increase quickly from there. The combination of rapidly increasing sales against a fixed depreciation cost is significant.  On top of that there’s also falling battery prices. By the end of the decade VW is expecting battery costs to fall 30-50% from today’s $140/kwh, taking battery costs below the $100/kwh threshold at which industry experts believe cost parity between EVs and combustion engine vehicles can be achieved.

Crucially, by around the middle of the decade we think VW’s margins on EVs will start to exceed those on equivalent combustion engine vehicles. Scale and the company’s platform strategy are key to VW achieving margin parity. Other traditional automakers won’t necessarily be in the same advantaged position.

For us, the EV race is one in which the spectators are fixated on the current front-runner, while ignoring the giant emerging from the pack.

In plain investment terminology – a case of unwarranted multiple dispersion.

This communication was prepared by Antipodes Partners Limited (ABN 29 602 042 035, AFSL 481 580) (Antipodes). Antipodes believes the information contained in this communication is based on reliable information, no warranty is given as to its accuracy and persons relying on this information do so at their own risk. This communication is for general information only and was prepared for multiple distribution and does not take account of the specific investment objectives of individual recipients and it may not be appropriate in all circumstances. Persons relying on this information should do so in light of their specific investment objectives and financial situations. Any person considering action on the basis of this communication must seek individual advice relevant to their particular circumstances and investment objectives. Subject to any liability which cannot be excluded under the relevant laws, Antipodes disclaim all liability to any person relying on the information contained on this website in respect of any loss or damage (including consequential loss or damage), however caused, which may be suffered or arise directly or indirectly in respect of such information.

Any opinions or forecasts reflect the judgment and assumptions of Antipodes on the basis of information at the date of publication and may later change without notice. Any projections are estimates only and may not be realised in the future. Information on this website is not intended as a securities recommendation or statement of opinion intended to influence a person or persons in making a decision in relation to investment. Unauthorised use, copying, distribution, replication, posting, transmitting, publication, display, or reproduction in whole or in part of the information contained on the website is prohibited without obtaining prior written permission from Antipodes.

Pinnacle Fund Services Limited ABN 29 082 494 362 AFSL 238371 is the product issuer of funds managed by Antipodes.  Any potential investor should consider the relevant Product Disclosure Statement available at www.antipodesonespartners.com when deciding whether to acquire, or continue to hold units in a fund. The issuer is not licensed to provide financial product advice.  Please consult your financial adviser before making a decision. Past performance is not a reliable indicator of future performance.

By clicking I agree below, you confirm that you are an Australian resident, or will only access Fund Information as a unitholder in a Fund issued by Pinnacle Fund Services Limited, and you accept all of the Terms of Use of this website, which may be found here.

By clicking I agree below, you confirm that you are a New Zealand resident, or will only access Fund Information as a unitholder in a Fund issued by Pinnacle Fund Services Limited or Implemented Investment Solutions Limited, and you accept all of the Terms of Use of this website, which may be found here.

By clicking I agree below, you confirm that you are a qualified / professional investor or equivalent in the relevant jurisdiction where the vehicle is permitted to be marketed to. You also confirm that by accessing this website, you will not contravene, or cause Antipodes or any of its affiliates to contravene, any law that seeks to regulate financial promotions both in the country of your residence and in the country in which you are viewing this webpage and you accept all of the Terms of Use of this website, which may be found here.